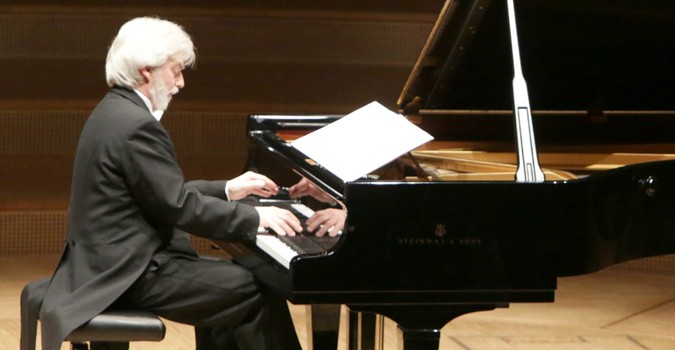 Krystian Zimerman is among the greatest contemporary artists. Krystian Zimerman’s piano is a celebration for the ears, dazzling and revealing, that leaves no detail behind. This is due to the originality of his concerts, which are always intensely personal and meticulously prepared.

Krystian Zimerman is an unusual pianist, in every sense of the word. He records little and performs frugally on stage. Rare also by his resolutely new and incredibly thorough approach to the works, the splendor of his playing, the incredible timbres which he succeeds in extracting from his piano - he never travels without his instrument, as in the past the mythical Horowitz and Michelangeli.

Krystian Zimerman was born into a musical family in Zabrze in southern Poland in 1956. He was introduced to chamber music-making as an infant by the many musicians who visited his home, received his first piano lessons at the age of five from his pianist father and subsequently studied privately and at the Katowice Conservatory with Andrzej Jasiński. Zimerman made his breakthrough in 1975 when he won First Prize at the International Fryderyk Chopin Competition in Warsaw. Although the 18-year-old emerged as the prestigious competition’s youngest ever winner, he recognised that he needed time to develop his artistry. In 1976 he was invited by the legendary Artur Rubinstein to work with him in Paris. Fresh artistic and psychological insights arose from his consequent period of close study with one of the 20th century’s greatest pianists, as well as from time spent with Claudio Arrau, Emil Gilels, Sviatoslav Richter and Arturo Benedetti Michelangeli, among others.

A particular feature of the 2017-18 season has been his participation in the Bernstein centenary celebrations with a series of performances of “The Age of Anxiety” in company with, among others, the London Symphony Orchestra and Berliner Philharmoniker and Rattle, and the Tonhalle Orchestra Zurich and David Zinman. Other recent highlights include his debut in China with the Shanghai Symphony Orchestra and Paavo Järvi; concerts with the Taipei and Bangkok symphony orchestras; and performances of Brahms’s Piano Concerto No.1 and Beethoven’s Piano Concerto No.4 with the London Symphony Orchestra and Berliner Philharmoniker under Rattle. He begins the 2018-19 season with further performances of “The Age of Anxiety” with the LSO and Rattle at the Lucerne Festival and Tokyo’s Suntory Hall (September 2018).

Over the past four decades, Krystian Zimerman has collaborated with many of the world’s leading musicians. He has performed chamber music in partnership with, among others, Gidon Kremer, Kyung-Wha Chung and Yehudi Menuhin, and worked with such conductors as Leonard Bernstein, Pierre Boulez, Bernard Haitink, Herbert von Karajan, Zubin Mehta, Riccardo Muti, André Previn, Seiji Ozawa, Sir Simon Rattle and Stanisław Skrowaczewski.

Krystian Zimerman’s artistry, unlike that of most other pianists, is inextricably linked to his knowledge of the mechanics and structure of his instrument. He developed practical skills as piano builder and keyboard technician during his formative years and has refined them since in close cooperation with Steinway & Sons in Hamburg.