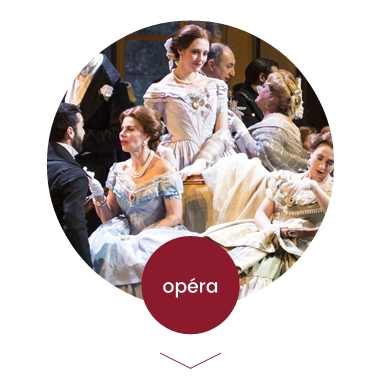 Discover operas around the world

Find the great masterpieces of the repertoire in the most prestigious operas...

Music & Opera guides you to these emblematic lyrical pieces.

Discover the operas scheduled this season around the world and book your tickets...

But what is exactly an opera ?

The newcomers sometimes visualize the productions of the Palais Garnier, the Scala of Milan or the Wiener Staatsoper with dusty stages and cardboard decorations. This is not the reality. The world of lyrical art is as vast as the centuries it embraces. What can be compared faintly with sung theater by far is an impressive number of stories thanks to constantly renewed librettos.

To tell these varied intrigues, Mozart, Puccini, Wagner, Verdi appealed to mythology, to history or sometimes even to everyday life. So many differences between Don Giovanni, Salome, Traviata or Einstein on the Beach between the world of Turandot, Lulu and La Belle Hélène! There is evidence that since the origins until the late sixteenth century, about 30,000 operas have been composed, many of which have fallen into oblivion. Today, approximately 3,000 works are regularly featured. The genre is still very alive because each season, more than a dozen new operas are born to keep feeding the passion of lovers of the lyrical.

Many of them travel the world to hear today's great voices. We are lucky to be able to applaud exceptional artists like Jonas Kaufmann, Anna Netrebko, Roberto Alagna, Juan Diego Flórez and so many others, not to mention the conductors. Their role is key because they are the ones who ensure the coherence of the whole.
On the subject of directors, it can be said that few are those who are received unanimously. Since the battle of Hernani, we know that some audiences have tastes so opposite that they are irreconcilable. Triggering passions makes all the beauty of the genre. And since we are mentioning it, let's talk about passion. The opera can provoke an incredible delight when one gets carried away! On stage, the singers invoke ovations and torrents of bravos.

To satisfy this passion, we are pleased to offer tickets for the world's most famous opera houses, such as the New York Metropolitan Opera, the Bayerische Staatsoper of Munich, the Royal Opera House in Covent Garden in London, the Teatro Massimo in Palermo, the Sydney Opera House, The Mariinsky of St. Petersburg, La Monnaie in Brussels, the Teatro Real in Madrid and many others that offer such rich programming.

All you have to do is reserve your tickets to attend a performance and taste the delights of these immortal masterpieces.