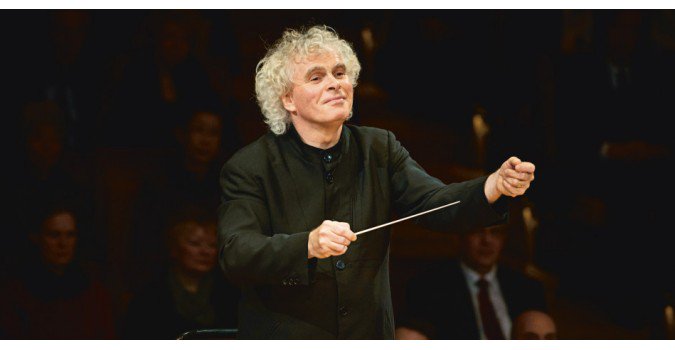 The trajectory of Sir Simon Rattle is exemplary. Known worldwide as the principal conductor of the prestigious Berliner Philharmoniker, he has made a great career that has naturally led to the highest step. Before the Berlin accomplishment, he made his debut in the UK. The job he undertook thereafter to lead the City of Birmingham Symphony Orchestra, took him to world recognition. In only a few years time, he will make this orchestra one of the best in the world. Mahler holds a special place in his career for he knows how to direct the maze of partitions like no other.

It is perhaps too early to judge his contribution to Berlin but we already know that Simon Rattle started a new chapter with his daring approach. Whether in the contemporary repertoire or the classic repertoire, he has significantly opened the horizons of an organisation that otherwise might have stagnated, due to too many traditions. Baroque leaders have had the honor to try the experience of the Berliner Philharmoniker, however it is in the great symphonic repertoire that Rattle remains an example of precision and zeal. His unique style is expressed perfectly in Brahms as in Beethoven where he has kept the tradition while emancipating the execution at the same time. At the dawn of a new adventure at the head of the London Symphony Orchestra, Simon Rattle remains a modern leader, the image of a musician right in his century.

Find all Simon Rattle's latest news on his Facebook page !

Symphony No. 2 - Mahler
Sold out