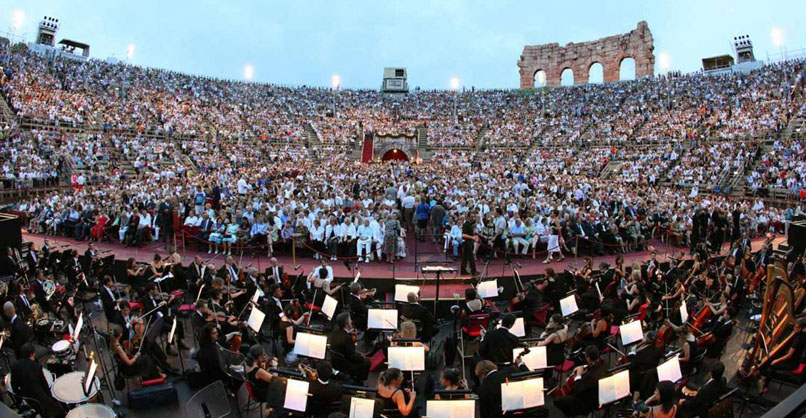 Discover below the new season of the 2023 Arena di Verona!

The new 2023 season of the Arena of Verona promises to be more than exceptional as the world's largest open-air opera festival celebrates its 100th edition! For the occasion, the guest list is very prestigious.

Four huge international stars: the magnificent star dancer Roberto Bolle, the fabulous Juan Diego Flórez who makes his debut in the arena, and Plácido Domingo and Jonas Kaufmann who make a long-awaited return! Another event to note is the arrival of the orchestra and choir of Milan's Teatro alla Scala for the very first time in the history of the arena.

The grandiose stagings of the opera masterpieces for which the Festival is famous are of course on the programme. Franco Zeffirelli has left more than one memory for festival-goers. His productions of Bizet's Carmen, Puccini's Madama Butterfly and the last one he designed for the Roman amphitheatre, undoubtedly his most moving, Verdi's La Traviata, will be revived.

A new Verdi's Aida, on the other hand, will be performed. This new production of the masterpiece is certainly eagerly awaited. Music lovers can look forward to the return of Verdi's impressive Nabucco by Gianfranco de Bosio. Like Hugo de Ana with Rossini's Il barbiere di Siviglia and Puccini's Tosca, the man of the theatre has created an iconic production that has been and will continue to be a highlight of the Verona Arena Festival.

To complete a particularly varied programme for this anniversary season, the only thing missing is Verdi's Rigoletto, which is also scheduled.

Opera and ballet tickets should be booked as soon as possible in order to get the best seats for the Verona Arena Festival 2023, a 100th anniversary season that promises to be fantastic!

Known worldwide for its spectacular productions, the Verona Arena Festival celebrates its 100th edition, the starting point of this exceptional group stay in its superb region.
thu. 22 June 2023 to mond. 26 June 2023
4 nights

The Verona Arena Festival is world famous for its big show productions and high luxury casts. On the poster of this stay some of the biggest stars
thu. 29 June 2023 to sun. 02 July 2023
3 nights