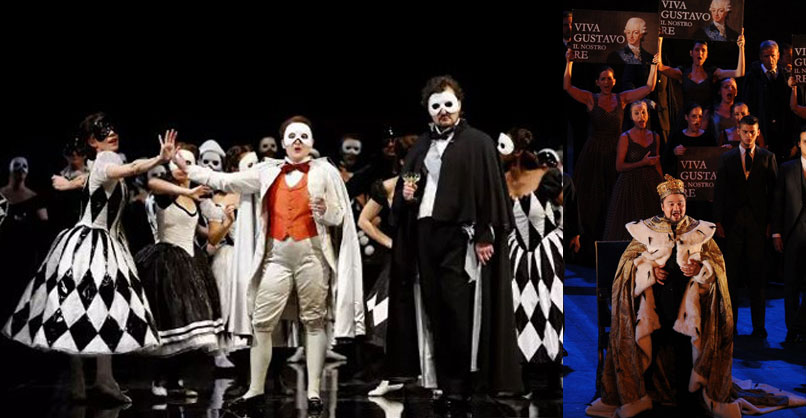 If you like your opera with a touch of politics then you will enjoy Le bal masqué. This opera was composed by Giuseppe Verdi with a libretto by Antonio Somma and was premiered in Rome in 1859. The opera is based on the assassination of King Gustav III of Sweden, although the final version had to undergo several changes because of censorship and the tense political situation in France.

Act 1
The long first act of Le bal masqué opens at the court of King Gustavo of Sweden; he is reviewing a list of guests for his masked ball. Gustavo is in love with Amelia, the wife of Count Anckarstrom and is happy to see that she is a guest. When the Count arrives he tries to warn the King of trouble in his kingdom but Gustavo will not listen. A magistrate asks King Gustavo to banish Madame Arvidson, a fortune teller accused of witchcraft but she is defended by Oscar, the King's page. To test the accusation the King calls upon his courtiers to disguise themselves ready to meet at her lodgings. Amelia arrives to see Madame Arvidson and the disguised King hides. From his hiding place he hears Amelia profess his love for him and the problems this is causing her. The fortune teller advises her to collect a magical herb. King Gustavo and his courtiers present themselves to the fortune teller and their fortunes are read. Madame Arvidson prophesies that the King will be killed by the next man to shake his hand, who turns out to be Count Anckarstrom.

Act 2
It is now the middle of the night and Amelia bravely visits the forest to pick her herbs. King Gustavo surprises her and they declare their love for each other; but suddenly the Count arrives and Amelia veils her face to hide from her husband. The Count tells the King that conspirators are looking for him and his life is in danger. As the King flees he asks Count Anckarstrom to escort the veiled lady back to the town. The Count has to fight the conspirators and in the struggle Amelia´s face is revealed. Count Anckarstrom immediately thinks the worst. He confers with the leaders of the conspiracy and they agree to meet the following day.

Act 3
Count Anckarstrom threatens to kill Amelia. She pleads her innocence and begs to see her son one more time. The Count relents and decides Gustavo must die instead. When the conspirators arrive they ask Amelia to draw lots to see who will kill the King and the Count is chosen. They decide that the masked ball, Le bal masqué, will be the perfect place for an assasination. At the ball the King is seen resolving to be strong and deciding to send Amelia and the Count away from court but the Count finds and stabs King Gustavo. As he lies dying he declares that Amelia did not break her marriage vows although he loves her. He bids farewell to his friends and his country and dies.