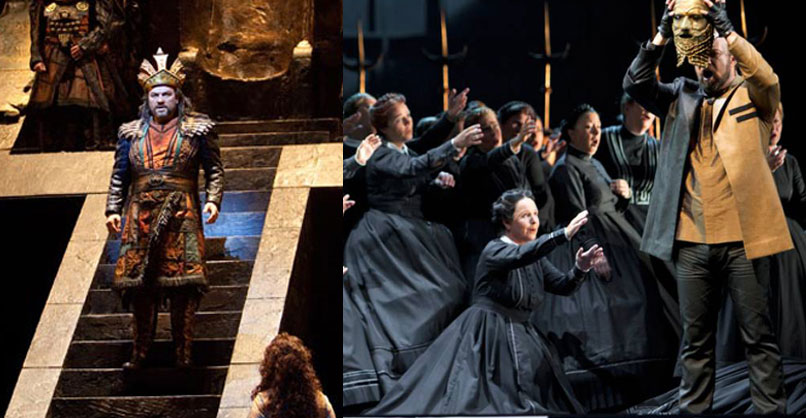 This opera is dear to all Italians and contains the massively famous aria “Va, pensiero” that everyone in the peninsula knows almost by heart. At the centre of an intricate politic impeachment, Abigail is, by far, the flashiest among Verdi’s heroin.

This Verdi’s opera in 4 acts to a libretto written by Temistocle Solera is known to the general public for the sublime arias such as “Va, pensiero”, that has become a very powerful ode to freedom or “ Coro degli Schiavi Ebrei ”. When the opera premiered, the political message it brought was very relevant and easy to identify with, as the despair of the Jewish people and their resistance against tyrant Nabuccodonosor would mirror that of the Milanese people against the Austrian invaders. Beyond the message though, the opera is, above all, an interesting revise Alfieri’s “I Deliri di Saul”. The opera premiered at La Scala in Milan on 9 March 1842, gaining instant success.

HISTORY
The opera tells the story of a group of captive Israelites triumphing over their Babylonian captors. The Israelite leader, Ismaele, fights the forces of evil to keep the love of the Babylonian princess Fenena and return his people to Israel. He has to defeat the High Priest of the pagan god, Baal, and the wicked princess, Abigaille.

Act 1
The Babylonian army arrives in Jerusalem. Zaccaria, the high priest, entrusts Fenena to Ismaele, nephew of the King of Jerusalem. The couple are already in love, having met when Ismaele was previously captive in Babylon. Abigaille, King of Babylon's eldest daughter, is also in love with Ismaele. She threatens Fenena with high treason if the couple do not renounce one another. Ismaele refuses, betraying the Israelites. The King of Babylon destroys the temple.

Act 2
Abigaille discovers that she is the daughter of slaves. The High Priest of Baal spreads rumours that Fenena has released the Israeli captives and that he intends to place Abigaille on the throne. Zaccaria tells the Israelites that Fenena has converted to Judaism and pleads with them to forgive Ismaele. Because of Fenena's conversion, the King of Babylon threatens all of the Israelites with death. When he declares himself a god, there is a crack of thunder, his crown falls off and Abigaille seizes it.

Act 3
Abigaille is now queen of Babylon. She tricks the broken King of Babylon into signing the death warrant of the Israelites, which means the death of Fenena. He pleads for her life but Abigaille is unmoved and tears up the document that proves she is a slave. On the banks of the Euphrates, the Israelites sing their song of longing for the homeland: Fly, thoughts, on golden wings.

Act 4
The King of Babylon watches as Fenena is led to her death. He promises to convert to Judaism and to rebuild the temple of Jerusalem if Fenena's life is saved. His strength is restored and he hurries to save Fenena and the Israelites from death. The Babylonian idol falls to the ground and Abigaille poisons herself. Fenena forgives Abigaille as she dies.