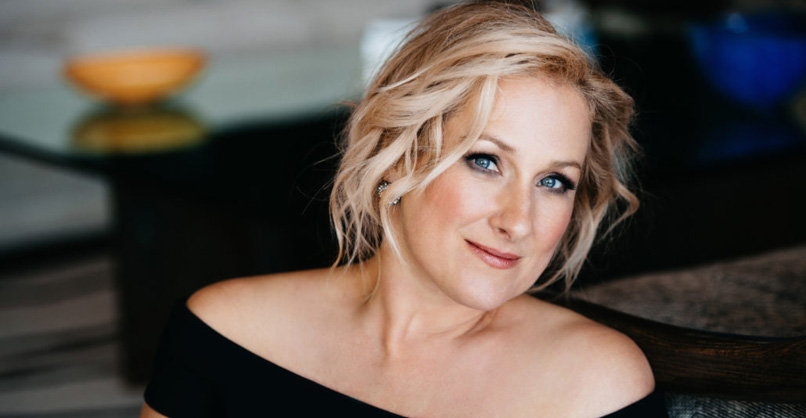 In a few years time, this German soprano has found her place at the top. Not many artists are capable to intelligently follow the natural development of their voice. The outstanding success of Diana Damrau is easy to describe: a directory tackled with ease and personality. Light roles where her pure voice enchanted the public have given way to more dramatic heroines like her exceptional Traviata at La Scala in Milano. The bel canto repertoire is a new domain, but she also excels in the heroines of the French opera. An accomplished actress, Diana Damrau knows how to blend in with the stage director's vision to deliver impeccable service.

Just the beauty of her voice is enough to delight the most demanding and it´s a chance that her theatrical talent also serves her art. The memory of her Queen of the Night with vehemence and rage are not easy overruled by her recent Violetta. She sang the role in several productions with the same natural attaque, each time addressing a different facet of the personality of the heroine of Verdi. The artist is capable of continually renewing her dramatic approach while maintaining a perfect vocal style. Diana Damrau is part of the exclusive club of the best sopranos in the world. We must, without further delay, book our opera tickets to enjoy the subtle art of this very great performer.

Find all Diana Damrau's latest news on her Facebook page !​

Invested as Kammersängerin of the Bavarian State Opera (2007) and holder of the Bavarian Maximilian Order for Science and Art (2010), Diana Damrau has forged close links with the Bayerische Staatsoper in Munich where she has been seen in new productions of Lucia di Lammermoor, Les contes d’Hoffmann (the four heroines), Ariadne on Naxos(Zerbinetta), The Silent Woman (Aminta), Die Zauberflöte(Queen of the Night) and Rigoletto (Gilda). Other high profile appearances have included La Traviata (Violetta), Der Rosenkavalier (Sophie), Die Entführung aus dem Serail (Konstanze) as well as Le Nozze di Figaro (Susanna and Contessa d’Almaviva).

The Metropolitan Opera has been a house in which the soprano has performed her signature roles, been broadcast in HD to cinemas globally and made seven role debuts since her own debut there as Zerbinetta in 2005. Highlights have included new productions of Rigoletto (Gilda), Il Barbiere di Siviglia (Rosina), Le Comte Ory (Adèle) and Les pêcheurs des perles (Leïla). Other engagements have included the title roles in Lucia di Lammermoor, La Traviata, Manon, La Sonnambula and La Fille du Régimentand Roméo et Juliette. She was also the first singer in Metropolitan Opera history to perform the roles of Pamina and Queen of the Night in different performances of the same run of Mozart’s Die Zauberflöte.

The soprano has also performed contemporary works for the opera stage in roles written especially for her, most notably as the title role in Iain Bell’s operatic adaptation of Hogarth’s A Harlot’s Progress (Theater an der Wien, 2013) and as Drunken Woman/Gym Instructress in Lorin Maazel’s 1984 (Royal Opera House, 2005).

In September 2017, Diana Damrau opened the concert season of the Royal Concertgebouw Orchestra Amsterdam with selected Mozart Arias. At the reopening gala of the Berliner Staatsoper she interpreted together with the Berliner Staatskapelle under the baton of Daniel Barenboim Ludwig van Beethoven’s 9th Symphony.

In December 2018 she starred as the title role in a new production of La Traviata at the Metropolitan Opera. Moreover, Diana Damrau is “Artist in Residence” at the Barbican Centre London in 2018/19.

In the 2019/20 season she continues her fruitful collaboration with the Bavarian Radio Symphony Orchestra and Mariss Jansons and presents, in selected European cities and at the Carnegie Hall in New York, the Four last songs by Richard Strauss. In addition she is going to perform recitals with Sir Antonio Pappano and returns to the Scala di Milano in Roméo et Juliette, the Bavarian State Opera in I Masnadieri and the Metropolitan Opera in Maria Stuarda.