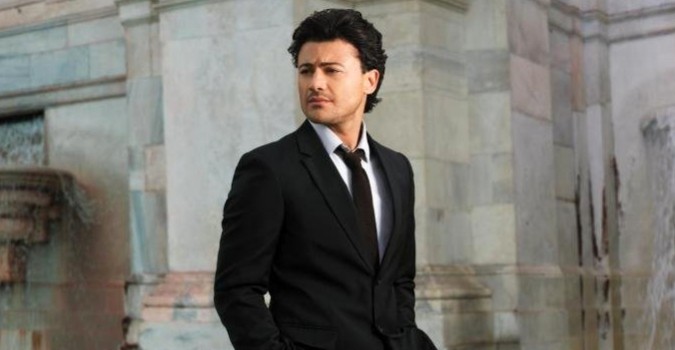 Vittorio Grigolo has the physique of an Italian fashion model. But his pretty face would never be motive alone to reach the top of the 10 best tenors in the world. Indeed, his vocal performance is at level with his acting qualities. He could alone embody the Italian tenor responsible for signing with all the major opera houses in the world. It is often urgent to reserve tickets to admire his stage performances. His career is surprising since he was discovered very early and has been lead singer of the choir of the Sistine Chapel in the Vatican. The anecdote tells that at 13, he shared the stage with the great Luciano Pavarotti. Since then, he is nicknamed Pavarottino, however the style of Vittorio Grigolo is more faithful to current standards where it is not enough to sing on the front of the stage with a beautiful voice. He defends the Italian repertoire, of course, with a predominance of the operas of Verdi and Donizetti but he also regularly addresses key roles as Werther or Faust. Undisputed star at the Metropolitan Opera in New York, La Scala in Milan and the Royal Opera House in London, he continues to lead a great career that has no indication to stop any time soon. To see Vittorio Grigolo on stage is an opportunity presented with beautiful singing and moments of pure happiness.

Find all Vittorio Grigòlo's latest news on his Facebook page !

Vittorio Grigolo, born in Arezzo and raised in Rome, studies singing at the Sistine Chapel’s Schola Puerorum cantorum, under the direction of Maestro Domenico Bartolucci. It is in the Eternal City that he first appears, at just 13, as the young shepherd in Tosca at the Opera House in Roma, beside Luciano Pavarotti.

At 17 he makes his debut as a tenor, the following year he begins to make a name for himself abroad, interpreting Don Narciso in Gioacchino Rossini’s “Il Turco in Italia” (The Turk in Italy), at the Kammeroper in Vienna. At 23 years of age, in 2000, he is the youngest tenor to inaugurate the La Scala Theatre in Milan with the Verdi inspired concert to open the season.

In just a few short years Vittorio Grigolo begins to perform on the most important stages in the world, under the direction of Riccardo Chailly, Lorin Maazel, Zubin Mehta, Riccardo Muti, Myung-Whun Chung, Daniel Oren and Antonio Pappano. In 2010 he debuts overseas with the role of Rodolfo in La Bohème, which crowns him as the new star of the Metropolitan Opera House in New York. The repertoire of Vittorio Grigolo includes the leading roles in Italian and French opera: La Traviata, La Bohème, Rigoletto, Elisir d’amore, Lucia di Lammermoor, Faust, Roméo et Juliette, Manon, Les Contes d’Hoffmann, Werther and many others.

Amongst the most memorable live performances of this extraordinary tenor, the tour “Italia…Un Sogno” (Italy… A Dream) for the Belpaese and the concert for the storming of the Bastille, near the Eiffel Tower, with an audience of more than 800 thousand people. His performance at the Metropolitan Opera was reviewed as “a truly unforgettable evening” (Latinos Post) and his voice described as “an interesting instrument, ardent and flexible, that he handles with passion.” (New York Times).

On the 6th September 2017, in the temple of opera, the Arena in Verona, Vittorio has the honour of interpreting the song-romance “Luciano” written by Nicola Piovani on the evening to commemorate 10 years since the death of Luciano Pavarotti, inspiration and mentor to Grigolo.  During 2018, Vittorio Grigolo interprets L’Elisir d’amore (Paris and Monaco), La Bohème (New York), Gianni Schicchi and L’heure espagnole (Paris), Lucia di Lammermoor (New York) and Tosca (Vienna).