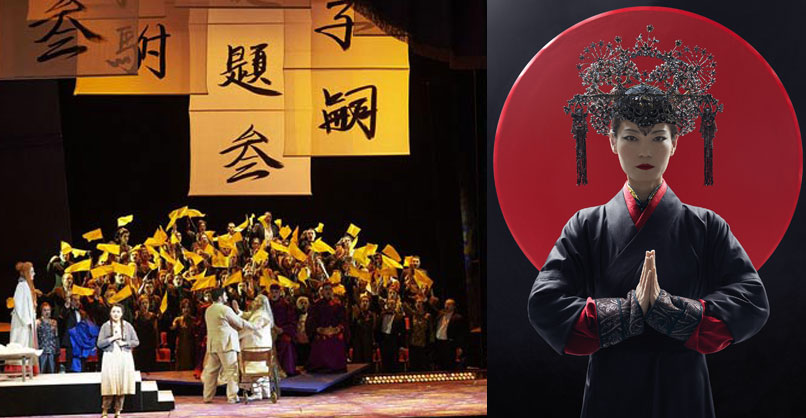 TURANDOT A MAGNIFICENT OPERATIC TALE
This is an epic opera by Italian master Giacomo Puccini that has been thrilling audiences around the world since its first performance at La Scala in Milan in 1926.
Compelling and adventurous, this three-act opera showcases Puccini's genius as a composer, and includes one of opera's most famous arias 'Nessun Dorma'.
It takes audiences on a journey that combines tragedy, romance and high drama that challenges singers and orchestras alike. Like so many operas, it has to be experienced live.

HISTORY
The action takes place in ancient Peking. Anyone wanting to marry the princess has to answer three riddles. Failure means death for the suitor, and the Prince of Persia pays the price. Prince Calaf correctly answers the riddles. The princess is horrified. Calaf sets her a riddle, which she fails to answer and Calaf becomes the first man to kiss her.

Act 1
The opera opens at the site of the execution of the Prince of Persia who has incorrectly answered the riddles. An old man stumbles. His slave girl, Liu, calls for help. The handsome Prince Calaf picks him up and recognises him as his long-lost father, Timur, a deposed king. A crowd calls for the Prince of Persia's life to be saved but he is executed. Prince Calaf resolves to answer the three riddles himself and his challenge is accepted.

Act 2
Ministers Ping, Pong and Pang tell each other tales of the failed suitors. Trumpets announce the beginning of the latest, Prince Calaf's, chance to answer. The Princess arrives and explains she has turned against all men after the death of her ancestor, a princess brutally murdered. One by one she puts her riddles to Calaf, and she is horrified as he answers each one correctly. She can only escape marriage if she answers Calaf's own riddle: what is his real name.

Act 3
There will be no sleep until the riddle has been answered. If the answer is wrong, everyone will die. Calaf sings Nessun Dorma ("No-one shall sleep"). A mob tries to kill him, then threatens to kill Timur and Liu unless they tell his real name. Liu confesses she knows it and the princess orders her torture. Liu kills herself and the crowd follow her body. Left alone, Calaf says she is the Princess of Death, yet he kisses her. He reveals his name: 'Love'.