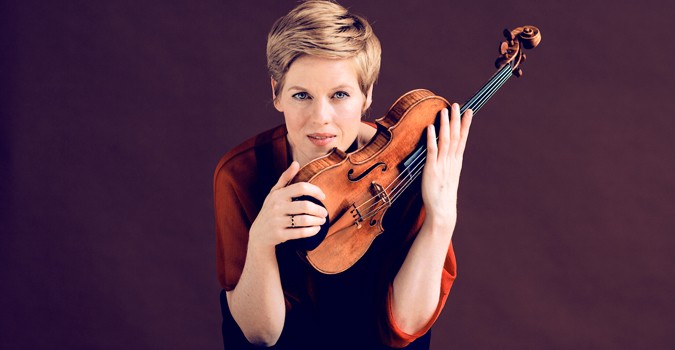 Isabelle Faust fascinates her listeners with her sound standing interpretations. She dives deep into every piece considering the musical historical context, historically appropriate instruments and the most possible authenticity according to a contemporary state of knowledge. She manages to constantly illuminate and passionately perform a repertoire from Heinrich I. F. Biber to Helmut Lachenmann.

Isabelle Faust’s vast artistic curosity and broad mind include all eras and forms of instrumental cooperation. Thus she never considers music as an end in itself but rather advances the piece’s essence in a devoted, subtle and conscientious way. Besides big symphonic violin concerts she plays for instance Schubert’s octet with historical instruments as well as György Kurtág’s “Kafka Fragments” with Anna Prohaska or Igor Stravinsky’s “L’Histoire du Soldat” with Dominique Horwitz. With great commitment she renders an outstanding service to the performance of contemporary music. Premieres of Péter Eötvös, Ondřej Adámek, Marco Stroppa, Oscar Strasnoy and Beat Furrer are in preparation for the upcoming seasons.

Numerous recordings have been unanimously praised by critics and awarded the Diapason d’or, the ECHO Klassik, the Grammophone Award, the Choc de l’année and other prizes. The most recent recordings include Mozart’s violin concerts with Il Giardino Armonico under the direction of Giovanni Antonini and the Baroque Orchestra under the direction of Pablo Heras-Casado. Isabelle Faust presented further popular recordings among others from sonatas and scores for violin solo by Johann Sebastian Bach as well as violin concerts by Ludwig van Beethoven and Alban Berg under the direction of Claudio Abbado. She keeps a long collaboration in chamber music with the pianist Alexander Melnikov. Common recordings were published containing all sonatas for piano and violin by Ludwig van Beethoven as well as other pieces.

Isabelle Faust is Artist in Residence at Wigmore Hall during the season 2017/2018.